High Shipping Prices from China and Heading to Turkey

What are the reasons for the high shipping prices from China?

The total number of global crises that have ravaged the whole world, from the outbreak of the Corona pandemic and the subsequent wave of unprecedented closures to the economic inflation that is ravaging the world today, even the richest countries in the world have had a retroactive effect that has led to a disruption in supply chains, such as:

This has been a major reason for high shipping prices from China to all over the world, which continues to rise steadily and continuously.

How has the increase in shipping prices from China affected commodity prices?

Within a steady series of disintegrating events, it was normal that the disruption of the world's supply chains would have led to instability in meeting the market's need for essential products and increased demand. This led to negative responses to global markets due to the monopoly of certain materials in the markets because of their scarcity and the interruption of imports needed to meet market needs, which recorded a significant decline.

We may not risk blaming, at least in part, the global inflation in most countries of the world for the high shipping price from China and elsewhere, which has strained markets and consumers alike. The real price of goods was irrationally increased due to the high price of shipping plus the greed of monopolists before goods reached consumers' hands.

How did the increase in shipping prices affect importers?

Despite competition from Chinese products for the prices of other countries' products, the doubling of shipping prices has significantly increased the value of goods to consumers and importers, forcing importers from China to look for other alternatives that meet their needs.

It was imperative that the increase in shipping rates affect importers, but rather change their attitudes from the usual supply markets to new destinations, where demand for goods has shifted and search for other sources of goods has become very urgent.

In fact, this had other calculations in world trade markets, and it was normal that some countries far from the pressure and pre-prepared with high-quality products would avail it.

Why did the demand for Turkish goods increase after the high shipping price from China?

The Turkish production market was not new, and its long-standing position cannot be described by words, as Turkish products invade most EU countries of many types of high quality, especially in the electrical and automotive sector and many primary products.

It is well known that recent years have seen a new situation in the increased association and trade between many EU countries and Turkey. For example, Britain has concluded a series of agreements with Turkey over the past year on supporting Turkish cargo supply bridges. Not to mention, Turkey's strategic location at the gates of Europe, Russia and eastern countries played an important role.

Is Turkey a distinctive alternative to Chinese goods?

A comprehensive and analytical view of the advantages of the Turkish product itself and Turkey's characteristics that distinguish it from China in terms of the production market must be considered. It would be useful to stick to two main points, of which a set of points is branched out:

Turkey has become a strong competitor to major global producers, such as China and Europe, in many products that have captured the satisfaction of global markets, as Turkish labour and products are no less skilled and qualified than others and often outperform them.

Turkey's geographical location and climate diversity have apparent advantages, especially since it is located in an incubator of regions hungry for its various products, both agricultural and industrial. Moreover, Turkey controls many sea lanes that separate warm and cold waters between the Mediterranean and the Black Sea.

Turkey's strategic location between Europe and Asia has also played a role in mitigating the effects of high shipping prices and competition, which has led Turkish products to compete with Chinese products, particularly in the Middle East and Europe, as shipping prices from Turkey are low and acceptable.

Read also about: The best products to import from Turkey 2022

Can Turkey cover the high demand of importers?

The Turkish production market has proven dynamic in many situations, highlighted by industrial, food, and transformative products, as part of steady steps by the Turkish government to support production through large facilities for investors and importers alike. Many automakers rely on the car parts manufactured in Turkey or even establish entire factories there. Turkish household products (such as Beko) ranked second in Europe in sales.

However, the lack of raw materials in the Turkish production market has affected producers, but the current situation of increased shipping costs for importers has made obtaining goods from Turkey at a lower shipping cost certainly a preferred option.

To compare shipping rates and costs pre and post Corona Epidemic, it is good to give a number of examples of the gap in shipping prices worldwide, especially after the global average shipping price increased by more than 100% in 2021, for example: 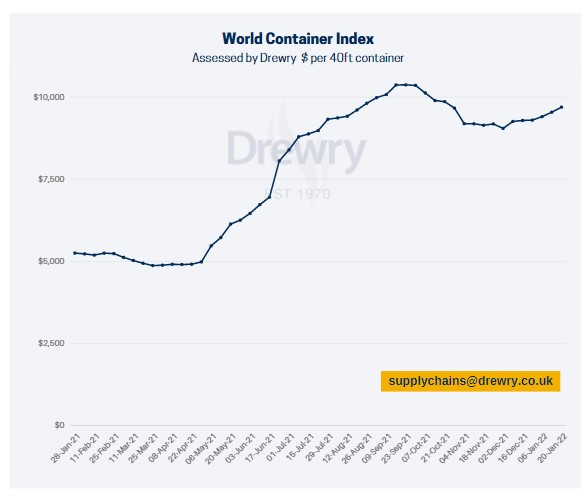 Here is a comparison of the cost of shipping a 40-foot container between China and Turkey on the one hand, and some world countries on the other:

Factories in Turkey and Turkey's Most Important Industries

Turkish Chocolate: Its Types, Features and How to Import It

Find out the best types of Turkish chocolate and its most important features, average wholesale prices, how to import it, and the services of Tebadul...